1952: Foreigners living in Saudi Arabia had previously been allowed alcohol, but in September, King Ibn Saud imposed a total ban on its import and consumption.

1910: New Zealand legislators banned the employment of women in bars. The only exceptions were members of licensees’ families and barmaids employed before the law came into force.

1967: South Australia became the last Australian state to abolish 6 o’clock closing at hotel bars. That put an end to the hour of frantic drinking after men finished work, characterised by “a flurry of shirt-sleeves, spilt froth, slapped-down change, and swished dish-cloths,” when “glasses of beer were slid two or three at a time along the wet counter-tops as fast as they could be pulled.” Then came the spectacle, after closing time, of drunken men tumbling out into the streets, lurching and vomiting their way home. No wonder it was called “the 6 o’clock swill”. 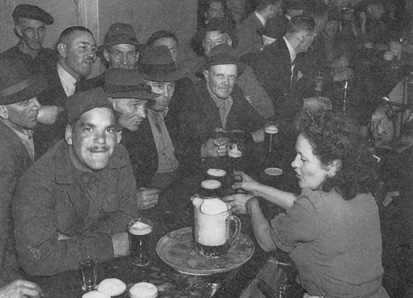 A barmaid at work in Petty’s Hotel in Sydney in 1941, photographed by Max Dupain