1925: After graduating from college in Iowa, William Shirer made his way to Montreal, where he boarded a cattle ship that carried him to Europe and the start of a career in journalism. To save money, he worked his passage across the Atlantic by feeding and watering the cattle and shovelling their manure overboard.

1924: The women’s rights campaigner Dora Russell produced statistics to show that in Britain, it was four times as dangerous for a woman to give birth as it was for a man to work down a coal mine. The death rate for miners from fatal accidents was 1.1 per thousand miners; the death rate among mothers in childbirth was four or five per thousand births, on average, and as high as nine per thousand in heavily industrialized towns. 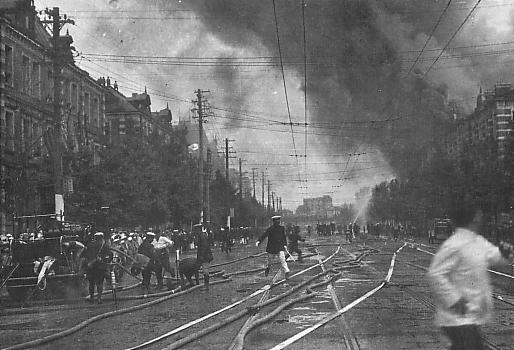 The Marunouchi district of Tokyo after the 1923 earthquake

1923: The massive earthquake that struck Tokyo, Yokohama and surrounding areas on 1 September killed as many as 140,000 people, injured 100,000 and damaged or destroyed the homes of more than 3 million. The tremors themselves destroyed less than 1 per cent of homes in the Japanese capital, but fires that raged for almost two days destroyed a further 62 per cent.

Stunned by the magnitude of the disaster, many Japanese believed rumours that Koreans were deliberately starting fires, looting shops and houses, and poisoning wells. Gangs of Japanese vigilantes, egged on by irresponsible government announcements, attacked Koreans. The police reported that 231 Koreans were killed and 43 injured. 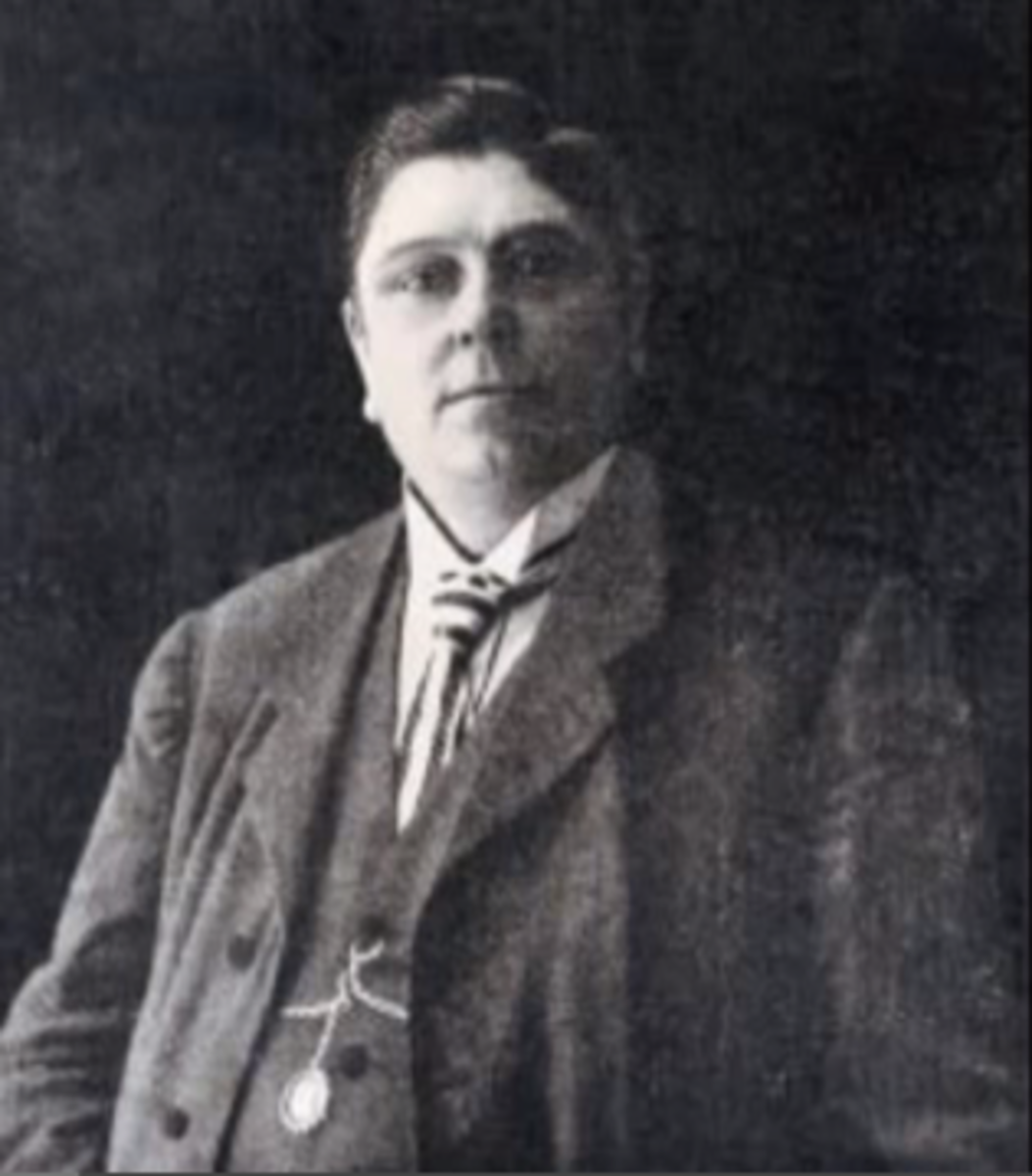 Alessandro Moreschi, photographed in about 1900

1922: The last castrato singer from the Vatican’s Sistine Chapel, Alessandro Moreschi, whose otherworldly voice had earned him the sobriquet l’angelo di Roma, died at the age of 63. “When his voice rose above the choir in a crescendo, it overpowered the accompanying boy sopranos as completely as a searchlight outshines a little candle.”

1921: Football supporters stayed away in droves when Stockport County played Leicester City at Old Trafford on 7 May; only 13 spectators paid to watch the match.

1920: Montagu Norman, the governor of the Bank of England, once confided to a colleague that he could literally walk through walls – just the sort of level-headed individual the country needed to run its central bank.

End Of The Line

1919: On a stormy night at the end of December 1879, a dozen central spans of the Tay railway bridge at Dundee collapsed while a train was crossing. The train tumbled 30 metres into the Firth of Tay, killing everyone on board – about 75 passengers and crew – and smashing the carriages. The engine, however, North British Railways No. 224, was scarcely damaged. It was salvaged, repaired and put back to work. Nicknamed “The Diver”, it remained in service until 1919.

1918: Maurice Bowra described his commanding officer as a man of “much fancy and charm”, though he had “certain eccentric tastes, such as pornography”. He was an avid reader, and sometimes read aloud to his men from The New Ladies’ Tickler.

Erik Satie, photographed by Man Ray in about 1921

1917: The music critic Jean Poueigh congratulated Parade’s composer, Erik Satie, when the ballet was first performed in Paris, but then savaged it in print. The enraged composer fired off a series of insulting postcards. “You are an ass-hole – and, if I dare say so – an unmusical ‘ass-hole’.” (“Vous êtes un cul – si j’ose dire, un «cul» sans musique.”)

1916: Inspecting the trenches of the 9th Royal Irish Rifles after a night of intense shelling, Colonel F.P. Crozier passed a soldier carrying a bulky sandbag. Crozier was suspicious. Thefts of rations and stores from the front line had been increasing, so he challenged the soldier, “What have you got in that bag?”

“I heard a lively story about a Scotch regiment to-day. They were burying the dead after an engagement and had begun to shovel earth on a German, when the man recovered consciousness and cried out ‘Me no deaded, me no deaded.’ ‘Agh’ cries the Scotie, ‘Shovel some earth on him, Geordie. Them Germans is such liars that one can’t believe a word they say!’ ”

1914: Don’t be overly nostalgic about the summer of 1914, warned Paul Fussell in The Great War and Modern Memory. And yet, in almost the same breath, he described it as “the most idyllic for many years”: a time for strolling in the countryside, a time for sipping tea at wicker tables under shady trees, a time when books could be left outdoors all night without fear of rain.

1913: On Easter Monday, Labour Member of Parliament J.H. “Jimmy” Thomas’s speech at the Free Trade Hall in Manchester was interrupted by a member of the audience. Edith Rigby, a suffragette, stood up, reached into her pockets and pelted Thomas with black puddings.

1912: The Stockholm Olympics saw two epic struggles in Greco-Roman wrestling. In the light heavyweight final, officials declared a draw after Anders Ahlgren of Sweden and Ivar Böling of Finland had tussled for nine hours. In the semi-final of the middleweight division, Martin Klein of Russia triumphed over Alfred Asikainen of Finland after 11 hours, but was too weary to contest the final.

1911: Captain Robert Scott’s Antarctic expedition celebrated midwinter on 22 June with a slap-up meal and a special issue of The South Polar Times, to which photographer Herbert Ponting contributed his thoughts on the best way to use their reindeer-skin sleeping bags:

1910: The Japanese colonial authorities in Korea emphasized the peninsula’s links with Japan and stamped down on Korean language and culture. The Japanese cherry was promoted while the rose of Sharon, or mugunghwa, was eradicated because of its nationalist connotations.

1909: Mappin & Webb advertised “suffragette jewellery” in purple, white and green: brooches and pendants set with amethysts, pearls and emeralds. Shoemakers Lilley & Skinner introduced “bedroom slippers in velvet and quilted satin specially dyed in the colours”. And a certain Miss Smith, of Barnham, in Sussex, also specialised in the purple, white and green of the suffragettes – in her case, sweet pea seeds sold by mail order.

Cat Out Of The Bag

1908: Aspiring novelist D.H. Lawrence let the eugenic cat out of the bag:
“If I had my way, I would build a lethal chamber as big as the Crystal Palace, with a military band playing softly, and a Cinematograph working brightly; then I’d go out in the back streets and main streets and bring them in, all the sick, the halt, and the maimed; I would lead them gently, and they would smile me a weary thanks; and the band would softly bubble out the ‘Hallelujah Chorus’.”

1907: The discovery that Leopold, the eighth of Queen Victoria’s nine children, suffered from the hereditary genetic disorder haemophilia, meant that the queen’s daughters might also carry the defective gene. Even if they displayed no signs of the disorder, they could transmit it to their children. 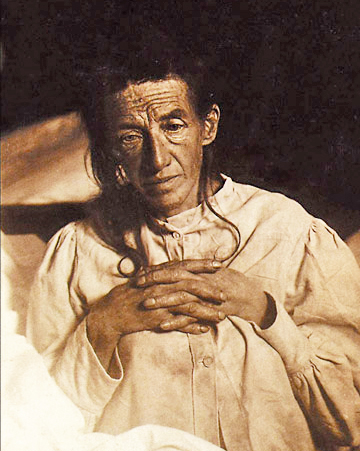 1906: Auguste Deter died on 8 April at the age of 55. She had been a patient at the Asylum for the Insane and Epileptic in Frankfurt am Main since 1901. Alois Alzheimer had taken a particular interest in Deter’s case, and after she died he examined her brain. Alzheimer discovered that she had been afflicted by a “peculiar disease of the cerebral cortex” – the first documented instance of the form of dementia that would be named after him. (Alzheimer’s earlier medical studies had taken him in a very different direction; his doctoral thesis had been on the wax-producing glands of the ear.)

1905: During the last two decades of the 19th century, the amount of coal transported annually to London by rail, sea and canal increased from 10 million to 16 million tonnes. Each day, more than 200 tonnes of fine soot were discharged into the city’s atmosphere. In 1905, Dr. Henry Des Voeux of the Coal Abatement Society merged “smoke” and “fog” to coin a new term for the pollution – “smog”.

1904: J.M. Barrie’s circle of young friends included Margaret Henley, daughter of the poet W.E. Henley. She called Barrie her “friendy” – or rather, her “wendy”, since she couldn’t properly pronounce “friendy”. That appealed to Barrie, who used Wendy as the name for a leading character in his play Peter Pan – its first use as a girl’s name. 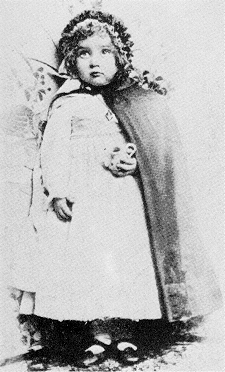 Margaret Henley, photographed in about 1893