1947: Britain had 383 known opiate addicts: 219 of them female and 164 male, including (seemingly an occupational hazard) 82 doctors, three pharmacists, one dentist and one vet.

1946: The Swedish aircraft manufacturer Svenska Aeroplan Aktiebolaget, SAAB, branched out into cars. The bodywork of the first prototype was produced by hand, hammered into shape with the steel panels resting on horse manure, which supposedly gave the panel beaters the right feel.

1944: Major-General Charles Gerhardt, commander of the American 29th Division, was a stickler for discipline. Amid the carnage and destruction of Omaha beach on D-Day – mangled corpses, smashed landing craft, burned-out vehicles and discarded weapons – he yelled at a soldier for dropping orange peel.

“Smoke Began To Rise With A Hiss Or Whistle” 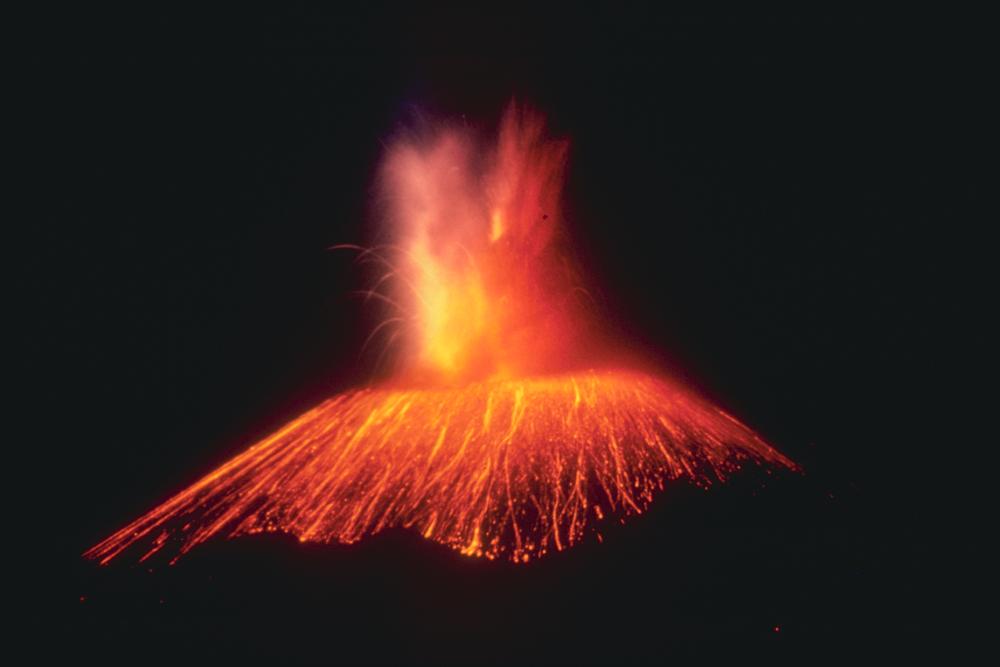 Parícutin erupting by night, photographed by R.E. Wilcox of the U.S. Geological Survey

1943: For weeks, the Mexican village of Parícutin had been jolted by earthquakes. On the afternoon of 20 February, as farm labourer Demetrio Toral and his oxen ploughed a cornfield, wisps of smoke appeared from a furrow they had just completed.

1942: Habbakuk was the code name for a secret British project to build a huge, unsinkable aircraft carrier. The project never got beyond research and the early stages of development, but if the vessel had been constructed, it would have been twice as long as the Queen Mary. Even more remarkable was the intended construction material – a frozen mixture of water and wood pulp. In essence, Habbakuk would have been a gigantic iceberg with a flat top to serve as a flight deck. The ice, of course, would have made it unsinkable; the wood pulp was for reinforcement.

1941: The attack on Pearl Harbor interrupted Donald Keene’s Japanese studies at Columbia University. Japanese in the United States were classified as enemy aliens, and the day after the attack, New York police detained Keene’s teacher, Tsunoda Ryūsaku. Japanese residents were suspected of gathering information about American defence facilities, although the most serious evidence against Tsunoda seems to have been that “he had been observed taking long walks without a dog”.

1940: In Warthegau, Polish territory annexed by Germany in 1939, Herbert Lange’s Sonderkommando used a large van fitted with a sealed chamber to eliminate mental patients. To allay suspicion, the side of the vehicle carried the logo of a well-known German coffee company – “Kaiser’s Kaffee-Geschäft”. Once the patients were loaded, carbon monoxide was piped into the chamber.

1938: Sir George Arthur’s Not Worth Reading doesn’t appear to have got beyond a first edition, so maybe book buyers took author Arthur at his word.

1937: The Lambeth Walk, a jaunty number from the musical Me and My Girl, was a success first on the London stage, and then in dance halls around Britain and on the Continent. Fascist leaders in Europe, however, took a dim view of the craze. In Italy, the dance was condemned for its “ugly, coarse, awkward motions and gesticulations”, and in Germany it was denounced as “Jewish mischief and animalistic hopping”.

Head office called him in to meet one of the directors. “We are sending you to Egypt,” the director said.

1935: During a visit to Moscow, the French foreign minister, Pierre Laval, urged Joseph Stalin to improve the lot of Catholics in the Soviet Union. Stalin was utterly contemptuous of Catholics and the Vatican. “The Pope!” he snorted. “How many divisions has he got?” (To which the perfect riposte would have been: “The same number that Karl Marx had.”)

1934: In the United States and other Western countries, the surgical removal of children’s tonsils was carried out almost as a matter of course.

1933: In The World of Spiders, William Bristowe recalled a burglar he had met who had had small spiders tattooed on his forehead in the belief that they would “bring him success in his profession”.

John Betjeman, phototgraphed in the 1920s

1932: Penelope Chetwode met her future husband, the journalist and promising poet John Betjeman, for the first time. Asked shortly afterwards what it was she liked about him, she replied, “He has green teeth.”

1931: On the afternoon of 22 August, a young British aristocrat named John Scott-Ellis was making his way along Brienner Strasse, in Munich, in a little red Fiat. “Although I was going very slowly, a man walked off the pavement, more or less straight into my car.” The 42-year-old pedestrian was bowled over, but quickly picked himself up, politely shook hands with the driver, and went on his way.

WATTY PIPER, THE LITTLE ENGINE THAT COULD

1929: A distinctive feature of the so-called Igbo women’s war was the way the women shoved the men aside to lead resistance to British rule in Nigeria.

The principal cause of the disturbances (“war” is an overstatement) was a clumsy attempt to conduct a census of women in the southeast of the country, provoking fears that the colonial authorities planned to impose a poll tax. “We women are like trees which bear fruit,” protested one woman. “You should tell us the reason why women who bear seeds should be counted.”

Women orchestrated and took a leading part in protest marches, the harassment of local officials, the burning of court buildings and the looting of European factories. They thought troops wouldn’t fire at them, but they were wrong; about 50 women were killed and a similar number wounded.

Source: Harry A. Gailey, The Road to Aba: A Study of British Administrative Policy in Eastern Nigeria (1971), chaps. 4–6

1928: After more than a thousand years of putting up with Easter chopping and changing between dates in March and April, Britain decided to pin it down. Parliament passed the Easter Act, under which the festival was fixed for “the first Sunday after the second Saturday in April” – between 9 and 15 April. Straightforward, except that the act included a proviso that “regard shall be had” of the opinions of churches and Christian bodies. Ninety years later, those opinions are still unclear and the law remains in limbo. Easter continues to fall on the first Sunday following the first full moon on or after the March equinox. 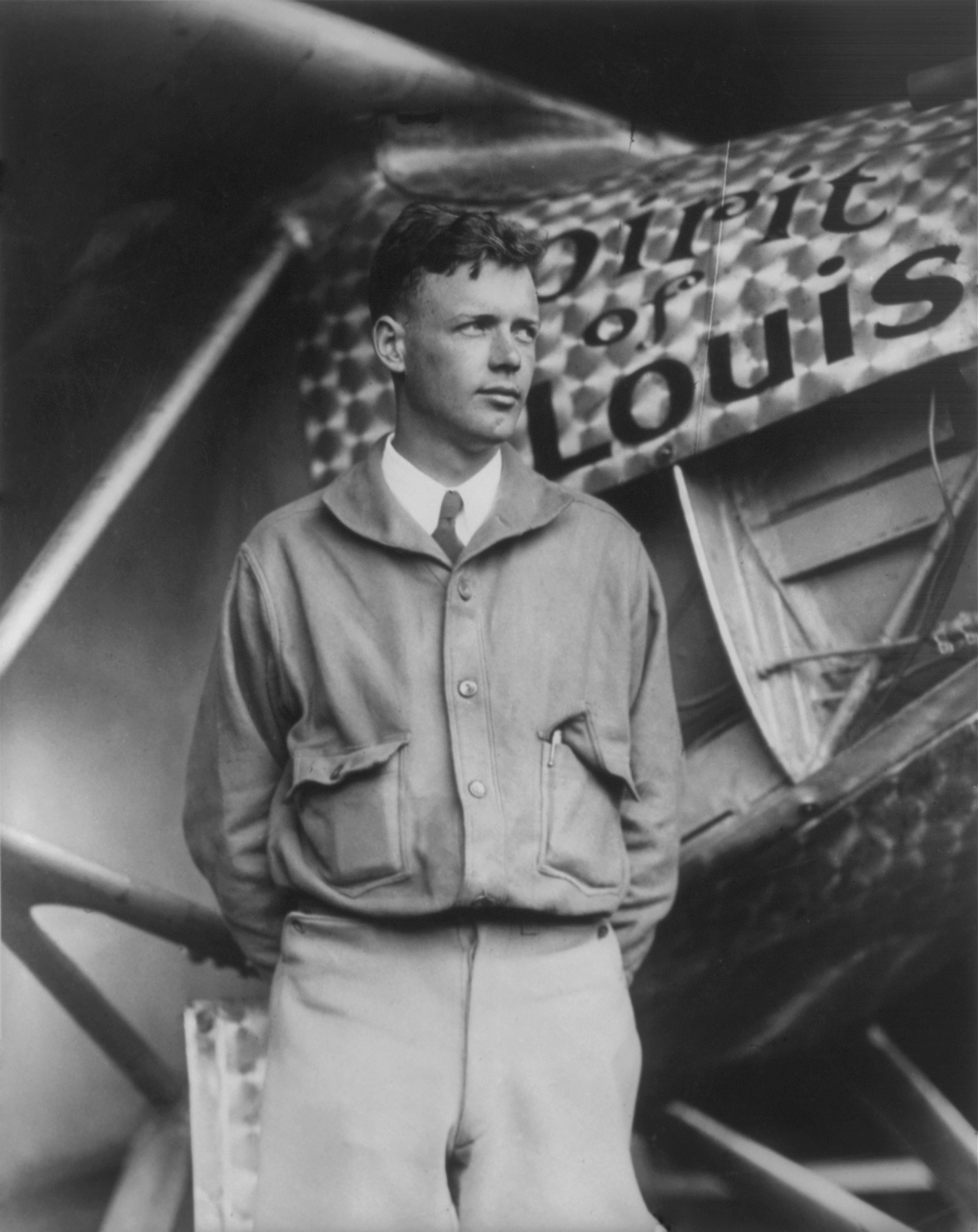 Charles Lindbergh, standing in front of the plane he flew across the Atlantic, the Spirit of St Louis