1957: The New York Times ran a story that tried to make head or tail of rock ’n’ roll, under the headline:
EXPERTS PROPOSE
STUDY OF ‘CRAZE’
Liken It to Medieval Lunacy,
‘Contagious Dance Furies’
and Bite of Tarantula

Music On The Move

1956: Chrysler, the American car maker, marketed its 1956 models with the option of a record turntable mounted beneath the dashboard. A sales brochure boasted that Highway Hi-Fi was “the greatest motoring entertainment feature since the car radio”, but this downplayed fundamental problems – not least, how to safely change a record in a fast-moving vehicle. No surprise, then, that the system was a commercial flop.

1955: It was a time when nuclear power offered the promise of clean, cheap, versatile energy. Alex Lewyt of America’s Lewyt Corporation predicted that within 10 years vacuum cleaners would probably be powered by atomic energy.

1954: Li Zhisui, Mao Zedong’s personal physician from 1954 onwards, disclosed in The Private Life of Chairman Mao that the Chinese leader never brushed his teeth. Like many Chinese peasants, Mao simply rinsed his mouth with tea when he woke, and then drank the liquid and ate the leaves. Mao’s explanation: “A tiger never brushes his teeth.”

“It was a queer, sultry summer, the summer they electrocuted the Rosenbergs . . .”

1952: David Ben-Gurion took up the suggestion of a Tel Aviv newspaper to offer the Israeli presidency to Albert Einstein. Einstein declined. “I lack both the natural aptitude and the experience to deal properly with people and to exercise official functions,” he modestly explained. That was the official reason; unofficially, he told a friend, “Although many a rebel has become a bigwig, I couldn’t make myself do that.”

Albert Einstein, the president who never was, photographed in 1947 by Orren Jack Turner

1951: Synaesthetes inhabit a world different from the rest of us; one where, for example, music or speech are not just heard, but seen in vivid colour.

The novelist and synaesthete Vladimir Nabokov described in detail the correspondence between letters and colours. The letter “n” was for him an oatmeal colour; “p”, the green of an unripe apple; “z”, like an “inky horizon”; and “a”, the “tint of weathered wood”. The yellow of “u” he could best describe as “brassy with an olive sheen”; while “m” was a “fold of pink flannel”; “h”, the brown of a “drab shoelace”; and “r” like “a sooty rag being ripped”.

1950: In the early 1950s, bull semen was conveyed around Japan by carrier pigeon.

1949: Before he discovered his vocation as a revolutionary, Ernesto “Che” Guevara studied medicine in Buenos Aires. Like many university students, he was strapped for cash, which led him into a series of ingenious but impractical commercial ventures. The most spectacularly unsuccessful was a scheme to manufacture domestic cockroach killer by mixing locust insecticide with talcum powder. Guevara set up a “factory” at the family home, but a nauseous smell soon pervaded the house, he and his “commercial partners” fell ill, and the venture went belly up.

1948: When a grenade shattered the right hand – the shooting hand – of Hungarian Takács Károly, it threatened to end his career as a pistol champion. Undeterred, he learned to shoot with his left hand and won gold in the rapid-fire pistol competitions at the 1948 and 1952 Olympics.

1947: The death of Matthew Connolly was a major loss in the field of gastropod studies. He was the author of The Land Shells of British Somaliland and A Monographic Survey of South African Marine Molluscs, as well as learned papers on such arcane malacological matters as the giant snail from Ceylon that licked the paint off window frames. Connolly discovered about 30 snails,

six of which were named after him and one after his son, the critic and writer Cyril Connolly. He was also a keen philatelist, hailed by Stamp Collector as “the greatest authority on Railway Parcels stamps”, and an acknowledged expert on potted meats and pâtés.

1946: For his 11th birthday, Elvis Presley’s mother bought him his first guitar. Elvis wanted a bicycle, but his mother was worried he might get run over, so she bought him a guitar instead.

1945: War correspondent George Orwell was delighted to find that Ernest Hemingway was staying at the same hotel in Paris. The two men had never met. Orwell went up to Hemingway’s room and knocked. A voice bellowed at him to come in. He opened the door and said sheepishly, “I’m Eric Blair.” The American was standing on the other side of the bed, packing suitcases. “Well, what the –ing hell do you want?” he shouted. Orwell spoke again. “I’m George Orwell.” Hemingway pushed the suitcases to the end of the bed. “Why the –ing hell didn’t you say so? Have a drink. Have a double.”

1944: Able Seaman Ken Oakley’s job on D-Day was to organise the men and machines disgorged from landing craft at Sword beach. “More and more craft were coming in continuously, and I was directing them. The trouble was, when the soldiers came ashore, their first reaction was, ‘Let’s group up and have a little check, and then we’ll have a cup of tea.’ ”

1943: Operation Gomorrah was the code name for British and American air raids that inflicted biblical destruction (“brimstone and fire from . . . out of heaven”) on Hamburg.

For 10 days the bombers returned again and again. In the early hours of 28 July, incendiary bombs unleashed a firestorm in the densely populated city. Many thousands of people perished in many hideous ways: sucked into blazing buildings by hurricane-force winds; torched by blizzards of sparks; trapped and suffocated in basement shelters; stuck fast in melted asphalt on the roads.

Their bodies, charred and shrivelled by the intense heat, piled up in the cellars and littered the streets. “How terribly must these people have died,” lamented one woman. “The smallest children lay like fried eels on the pavement.”

Source: Martin Middlebrook, The Battle of Hamburg: Allied Bomber Forces against a German City in 1943 (1980), chap. 15 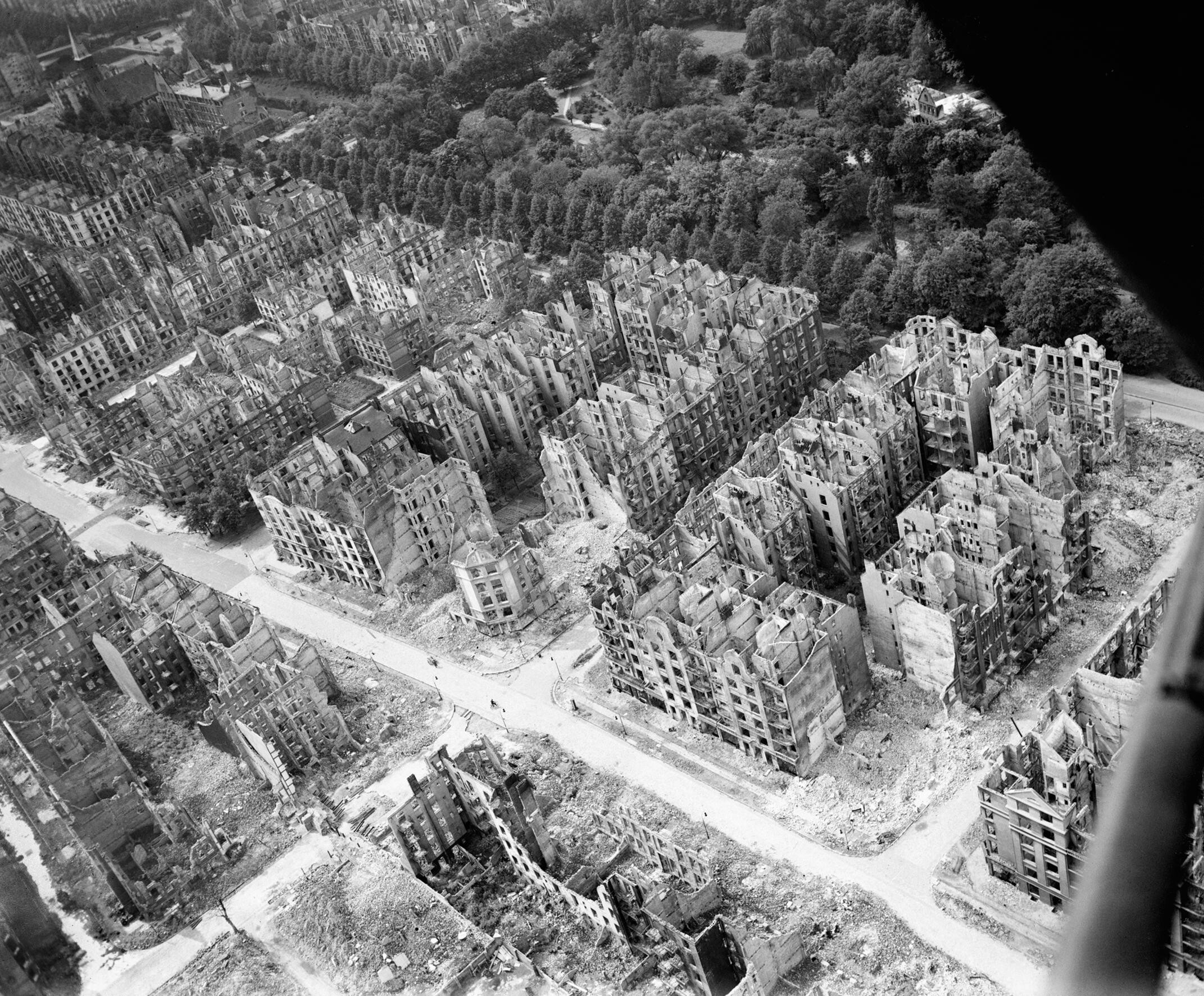 Devastated residential and commercial buildings in the Eilbek district of Hamburg, viewed by a Royal Air Force photographer

1942: As the battle for Stalingrad reached its climax, both sides hurled men and machines into the fray. West of the city, though, the German 22nd Panzer Division didn’t budge; its tank engines wouldn’t start. Not because of harsh weather, or Soviet sabotage, but because field mice had sneaked into the tanks and nibbled through the electrical insulation.

1941: Rugby union and rugby league have never seen fully eye to eye. In France, rugby union slumped in popularity in the 1930s as spectators deserted it for the newly introduced rugby league.

Following the military defeat of France in 1940, rugby union stooped to dirty tricks against its sporting rival. Officials lobbied the Vichy government, and in December 1941 rugby league was banned.

Although rugby league was rehabilitated after the downfall of Pétain, it never recovered its prewar vitality and remains a minority sport.

Caught On The Hop

1940: The speed with which the Wehrmacht lunged across northern France caught P.G. Wodehouse on the hop; he was trapped in his villa at Le Touquet.

Two months later, the Germans decided to intern all enemy males under the age of 60. Wodehouse was given ten minutes to pack. Ethel, his wife, went “nearly insane” and couldn’t find the keys for the room with the suitcase. Plum went into captivity equipped with “a copy of Shakespeare, a pair of pajamas, and a mutton chop”.

1939: As war loomed, the British government evacuated more than a million children and mothers from the cities to the countryside. Host families were appalled to find that some of the children lacked proper toilet training. It wasn’t the children’s fault; their parents hadn’t taught them. One Glasgow mother admonished her 6-year-old child: “You dirty thing, messing the lady’s carpet. Go and do it in the corner.”

1938: I felt “some slight sinking when I found myself flying over London”, turbulence “rocked and bumped” the aeroplane “like a ship in a sea”, and there were “more nervous moments when we circled down over the aerodrome” at the end of the flight. The apprehensive air passenger was Neville Chamberlain, heading to Munich in September for crisis talks with Adolf Hitler. 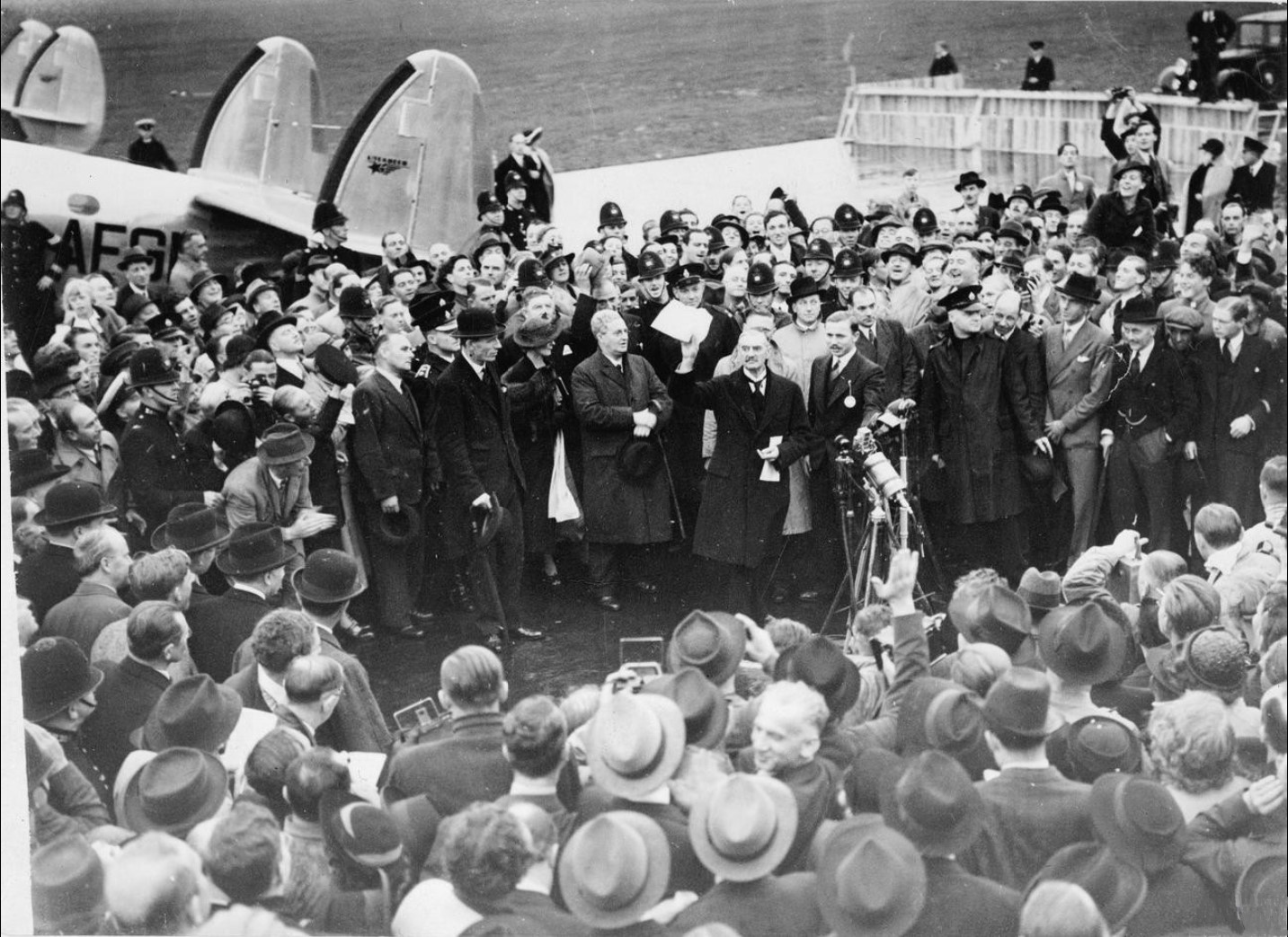 British Prime Minister Neville Chamberlain addressing a crowd at Heston Aerodrome on 30 September 1938, after his shuttle diplomacy secured “peace for our time”

“What is the difference between throwing 500 babies into a fire and throwing fire from aeroplanes on 500 babies?”

Cocaine For The King

George V in his coronation robes, painted by Luke Fildes

1936: From the middle of January, King George V’s health deteriorated rapidly. By the evening of 20 January, he was clearly dying and not expected to survive the night. His personal physician, Lord Dawson, prepared the text of a final bulletin: “The King’s life is moving peacefully towards its close.”

The Prince of Wales had earlier told Dawson that neither he nor Queen Mary wished to see life prolonged unnecessarily. When the doctor judged that the time had come, he injected morphia and cocaine into the king’s jugular vein. “Intervals between respirations lengthened,” and just before midnight, “life passed so quietly and gently that it was difficult to determine the actual moment.”